A Life Of Crime

H.R.F. Keating: A Life of Crime

Henry Reymond Fitzwalter “Harry” Keating, known to his many readers as H.R.F. Keating, was the author of more than 60 books. Fiction includes those centring on the widely-known Inspector Ghote of the Bombay CID; a further series about a British policewoman, Harriet Martens known as the hard detective and a further short series about a Victorian governess. As well as several stand-alone crime novels he wrote six mainstream novels and there are also ten non-fiction books.

These explore the world of crime fiction in all it’s various forms, many have contributions from skilled practitioners of the genre with Harry acting not only as editor but contributor as well. There is one slim volume written in the last century but still in print with the simple title Writing Crime Fiction. The biography uses the books he wrote as the skeleton of the narrative with his day-to-day life providing the flesh and blood.

As we progress from cradle to grave a picture emerges of a man who overcame many obstacles on the way to the top of his profession. It also shows us someone who loved writing above all else but still found time to revel in being the patriarch he became. Written as it is by his wife we learn much that had not been in the public domain before and it is told with a wry sense of humour which urges one to turn to the next page.

Here are some links to reviews on the official HRF Keating website.

A recent review in Strand Magazine below.

AVAILABLE HERE in print and on Kindle. 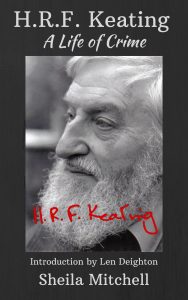 HRF KEATING: A LIFE OF CRIME makes for a fascinating read. It is packed with a wealth of detail that draws the reader through, but which also makes it an excellent resource that anyone who wishes to know more about Keating can dip into. It contains detail about his childhood that has probably not been published before. Michell’s descriptions of the diaries and papers her husband left behind is both poignant and deeply engaging, presenting as it does the detective work that goes into the unravelling of a life. His diaries from his late teens and early adulthood were found ‘buried deep amongst a multitude of manuscripts that filled a cupboard in his study.’ Mitchell reflects that her husband would almost certainly have destroyed them if he had not forgotten about their existence. They contain deeply personal reflections about the Roman Catholicism in which he was raised, and his attitude to the army, where he felt he was ‘a fish out of water.’ But he also talks of his self-education in which he reads prolifically, goes to galleries, theatres and opera. He was a questioning reader, exploring not just the background to the books he read, but the rationale behind the writer’s approach. In one entry, he comments on his struggles with Yeates, whose work later became one of his major influences. ‘Does this account for the ‘Lake Isle of Innisfree’?’ he speculates at one point.

You can see through these pages, the development of a multi-layered understanding of the world and the arts, which gave his books the depth that made him so much more than just another writer of crime fiction. The biography makes it clear that Keating’s appeal lay beyond the genre in which he was most successful. He wrote books outside the genre, including non-fiction and a futuristic novel, which Mitchell is clear to establish, cannot be classified as either science fiction or fantasy. She also discusses Keating’s decision to work, briefly, under a pseudonym, Evelyn Hervey, pointing out that the name, rather than indicating a female writer, is androgynous and dispels any anomaly that might exist in a reader’s mind when a man writes from the perspective of a woman. Keating’s success is clear when only one critic, the late Reginald Hill, speculated that this writer could be a man.

Keating is best known for the Inspector Ghote novels, even though they comprise only half of all his work. Keating set the novels in India, a place he had never visited. He also undertook the very difficult task of observing this culture through the eyes of an insider, Inspector Ghote, though, as Keating happily admitted, Ghote is also Keating himself. As Mitchell says, ‘He had created a character who lived his life in a totally different environment and was outwardly his antithesis but who, internally, thought his own thoughts and felt his own feelings.’

Mitchell explores the reasons for Keating’s choice of setting for this, his most successful series. One at least was pragmatic. His American publishers found his books ‘too British;’ but it was also the nature of India with its multiple setting and cultures that drew him. He made a deliberate decision not to set the books in the British Raj, but in the hidden nature of India with all its ‘perfections and imperfections.’

This biography is dense with facts, informative, funny and poignant by turns. It is a must for fans of HRF Keating, but is also for anyone who wishes to explore a writer’s life, or who wants real insight into the life of an individual who left his mark. Highly recommended.